The little boy opened the iron gate and it creaked in protest. But the boy slipped in through the narrow opening and walked down the cobblestone path in the middle of the grounds. He liked it here. It was quiet, peaceful and there was something about the stillness in the air that calmed his senses. He whistled a mournful tune as he trudged down the path. His mother never really liked him going through here but it made the trip back to their house shorter. The wind picked up a little and tousled his long, curly locks, almost obscuring his eye.

She watched behind a grave marker as the little boy trailed his stick on the ground. The stick made a tiny rat-tat-tat noise that blended with the whistling. The boy paused and looked up, there was something watching him. No, someone. He glimpsed a grey movement between the weeping angel and the broken gravestone. But it was gone. His whistling stopped and he stood still. The boy started walking again, this time beating his thin, walking stick on the ground. He whistled a merrier tune.

She had faded into the stone angel and watched as the boy tried to look for her. He never saw her but she always saw him. She stood in the mist, a grey figure among the shadows, looking at the tiny retreating back. She told herself, he would be back tomorrow.

Darkness had fallen now and the moon was slowly rising. She closed her

eyes and felt the moonlight caress her pale blue face. It was a pleasant memory, one that had carried her through eons of time. She was older than everything in the cemetery, older than the first residents, the crumbling stones with their faded script, even older than the land itself. She can’t remember the first time she rose from the earth and walked among the living. That memory was now a wisp of a fragment in the cacophony in her mind.

A sliver of cloud pierced the moonlight, blotting out the moon’s navel as she opened her eyes. She always liked the quiet of midnight. The sounds of the dark rippled across the sky as a snowy owl hooted out a lonely cry in the nearby tree.  She gently stepped into the path, reaching out to touch the passing gravestones one by one. As her fingers rested upon the cold stones, blue light illuminated the surface and the gentle sighs of the spirits resting under the earth echo in the moonlight. She had come to know them by heart, a lonely widower. An anguished wife. A couple of ill-fated lovers under the willow tree. And by the gurgling pond, a still newborn.

She paused and reached into the earth to caress an ethereal cheek. The faint mewing faded away. The night Zephyrs ran and frolic around the tombs, catching the wispy ends of her gown. Light would soon befall. She turned back and blew a kiss to the wee form under the tiny marker.

“Rest easy, little one. No more harm will come to you,” her thoughts trailed behind her as she walked back to the weeping angel by the path.

The faint fingers of light broke the dark veil of the night and a new dawn started. Closing her eyes, she lifted her head, her hair falling to reveal her upturned features. The dawn’s first light touched her still figure and for the briefest instant, her face turned into a twisted mass of earth, roots, flesh and bone. A flicker and it was gone.

Morning came and it was time for her to wait. She stepped into the outstretched figure with wings dripping with moss. She will wait for him, he always comes.

The heaviness of the noon time air hung like a wet blanket. Tiny feet were slapping on the stones, breaths coming in ragged gasps and a frantic body sprinted across the grounds. The boy hid between two mausoleums. He made himself as tiny as he could be.

From a distance, a drunken angry yell would resonate with hate. The boy shivered with every venom-dripping expletive. He put his tired head down, hiding the bruises and welts with his thin, frail arms.

The screaming have stopped. It seemed he was safe again. A leaf had fallen on his shoulder. How long had he been sitting there? He furtively looked up and saw no one.. With a slight groan, he unfolded his limbs and tried to stand up. It was brutal this time. He would be aching for weeks. Then, a shadow fell on him.

“There you are, you goddamned bastard! What did I tell you about running away before I could finish whipping you? You are just like her. You good for nothing son-of-a…” the swarthy man continued on and on as he pulled the boy roughly to his feet.

He shook the arm with every tirade and epithet frothing from his mouth, the boy stared back at him with fear. Then he saw it, a flash of grey and blue and he was suddenly free.

“What the-? How did you?” the man sputtered as he saw he was holding a piece of branch. The boy was no longer there. He spun around and saw her. She stood before him, shielding the boy behind her.

“Why you, bitch! That’s my boy you got back there and you have no right to-“

She held a finger up. The man’s voice stopped. His mouth kept opening and closing but no words came out. She strode forward, looked up and down at the bewildered figure.

She started to lean forward, the man tried to back away but his feet had suddenly sprouted roots and he looked down in horror. His eyes flew back up and saw her face was inches away from him. In her dark, grey eyes he saw a menace roiling in the depths. She brought her lips closer to his ears and whispered, “Done.”

The man slowly disappeared under the earth, the ground groaning and shuddering as it accepted the screaming form. The wailing stopped and everything was quiet again. She turned and saw the boy still standing there. Pale eyes darted back and forth from the earth where his father just stood and the grey lady.

“Yes.” She simply said. She held out her hand and looked at him. 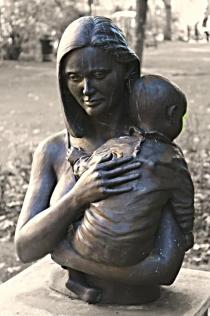 The boy gazed at her quizzically as if not understanding at first. He tentatively held   out his hand and placed it in her cold palm. She closed her fingers over his and led   him out to the path. They walked silently through the graves and tombs. And in a c     learing, she stopped. The boy bumped into her as she halted her stride.

“You will be alright.”

The thought entered his mind. The boy looked up and saw her smiling. She let go

of his hand and opened her arms. Without hesitation, the boy stepped into her

hug. Grey was creeping up from their feet and slowly enveloping them. A yellow

butterfly floated and landed on a stony head. She stepped out of the stone figures

and looked at the frozen tableau.

The stone sculpture of a mother and son in an embrace stood over the child’s tomb. She whispered in the wind… “Rest easy, little one. No more harm will come to you.”

Just another girl who writes crappy doodles and sloppy scribbles.
View all posts by RaineFairy →

What I’ve Been Blogging